The majestic Pont du Gard, Roman treasure and visitor attraction just under an hour away from Fontvieille, of which we knew nowt, seemed like a good way to bypass the midday canicule, if only for the chance of enjoying the vehicular aircon and taking a few cheeky snaps. We had no idea what to expect, if anything beyond the actual bridge, so to discover you could download an app for a visitor guide was surprising to say the least.

We foolishly left mid morning and therefore arrived with a peck, so prepared hasty knacki butties in the back of the van, with the blinds down, the windscreen cover on and a severe case of the sweats.

When we could bear it no more, we ejected th infants, one still chewing on a baguette nubbin, and headed for the turnstiles.

We were informed of the opportunity to cross said bridge and enjoy the riverside, museum, cafes, ice cream vendors and shop, so proceeded, map and butty in hand to enjoy the view.

We paused for ice cream and passed by another al fresco dining area with mist dispensers en route to the cave.

Her majesty was most unimpressed by the cave, even when I regaled her with facts about the archaeological wonders which had been discovered therein.

The walk across, however, was impressive. 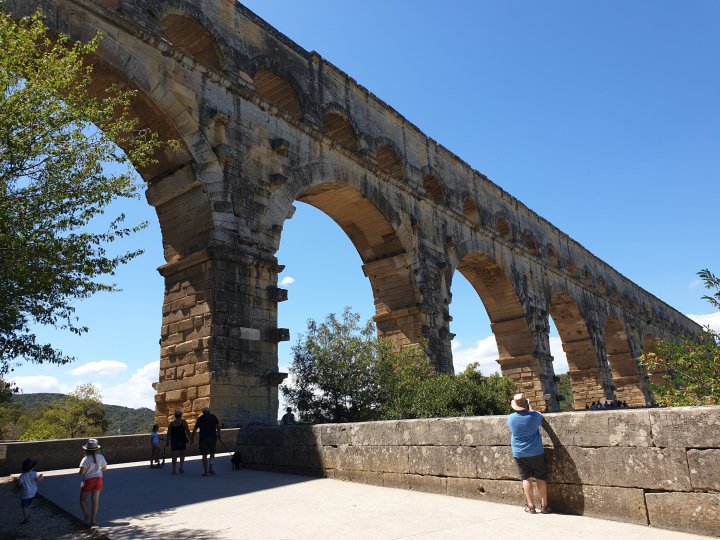 What was equally impressive was the breeze and the shade.

To say that the stones had been brought there by cart/boat and hefted into place manually was mind-boggling.

The sight of folk messing about in the water was tempting, but we decided to continue across to discover the other side, inspecting some ancient graffiti along the way.

The sheer size of not just the whole thing, but the individual blocks was enormous.

We enjoyed the ancient olive trees, transplanred apparently from España, as did many other visitors trying to get selfies in its sparse shade.

We sat under a mist shaded canopy and enjoyed soft drinks, spent time in the children’s museum making mosaics, weighing stuff, looking at water supplies and hastening back for a secondary ice cream.

The return trip was still shady but the heat had taken its toll, time for a return to some cool driving passing the river and shop.

As we discovered, the heat had been fierce. The van reckoned it was 42.5° on our return, bit once we got on the road and the aircon kicked in it was altogether more pleasant.

A thoroughly nice day out.