We left Zuydcoote beach after a reasonably leisurely morning and after stocking up on Gina, Knackis, goats cheese and crusty bread, headed for Belgium.

We were only a few ks off the frontier, and it was so underwhelming I missed a photo opportunity.

Belgium seemed to be an interminable road running alongside a tram track, parallel to the beach but on the inland side of the sea front properties and with little to no visible stopping places.

We trucked on for ages and ages and eventually, as we left Middelkerke, heading for Oostende, as the road swung in alongside the beach, there seemed to be an opportunity for a lunch stop. So we took it.

Judging by the quantity of sand that had blown across the road you would not be wrong to surmise it could get a bit breezy. We dined inside the vehicle and then took a brisk stroll on the sand. There was a youth out with a land yacht but he was giving it up as a bad job due to ovver gustiness and asked KB to help him catch and drop his kite, which he did, although he was forced into a bit of light trotting to prevent it blowing away.

Interesting Belgian Occurrence number 2 – we passed this place, which made me smile and wonder if they served jambon frites or Iles flottantes tasting of cat lit. 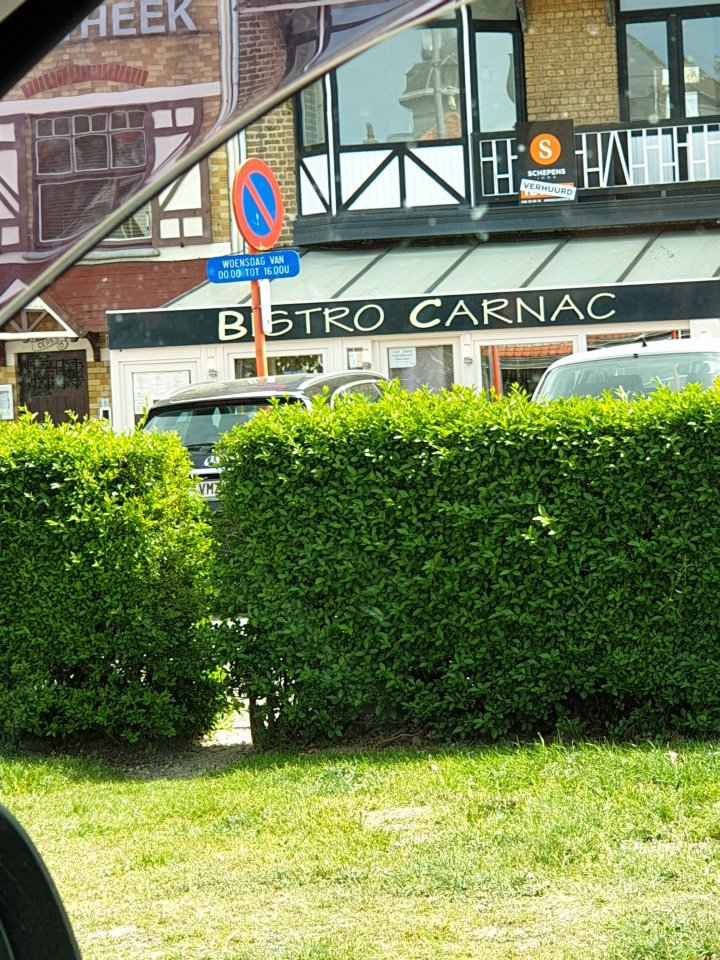 After what seemed like another long slog we passed another plain border and were in the Nederlands. 3 countries in one day! 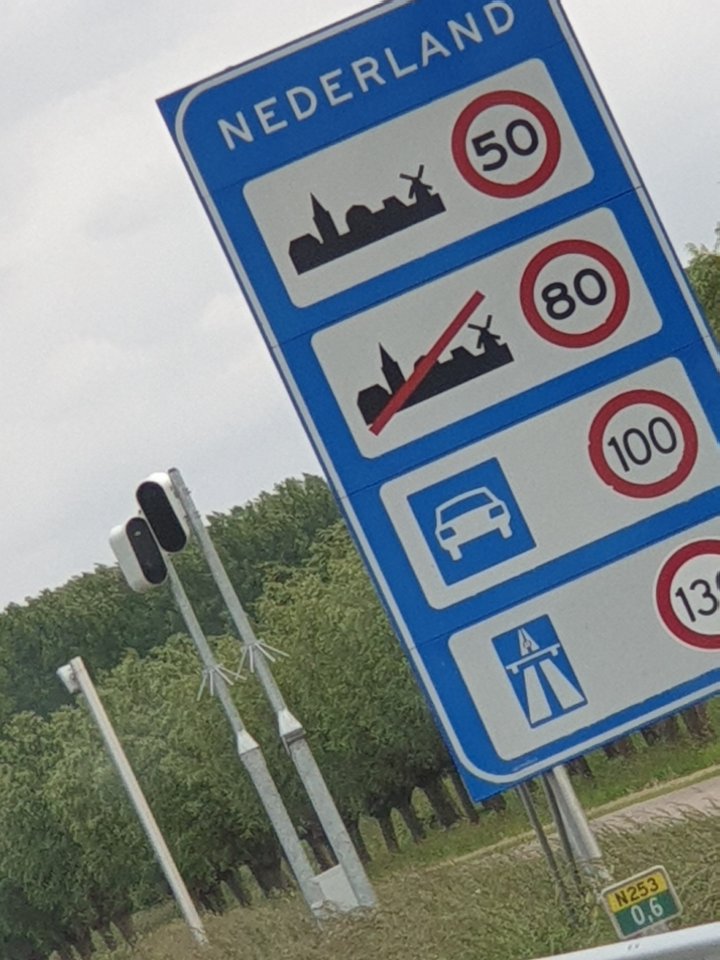 Unfortunately it was still a way to get to the vague destination I had had in mind. But here, the driving changed.

No more tram lined straight roads, instead very gentle single carriageways with integrated cycle paths and not a great deal of traffic. When we came to the bit I had been excited about, namely the big bridge across to the first island, I was extremely disappointed to find it was in fact, a tunnel, and we’d have to pay 5€ for the, ahem, pleasure of using it.

We stopped for a wee snack at a petrol station and to make a decision about where to head for.

and were just really pleased to be on Dutch soil.

My googling came into play here and we Brianned to Camping Janse, just out of Zoutelande. I made the decision that from now on we would choose a destination and use Brian, as the atlas didn’t show enough detail and I was getting a bit wary of relying on European internet. When we got there, we nearly missed it as there’s another campsite immediately before it, but after a swift Uey we pulled in at the Receptie underneath the full colour CCTV and number plate recognition activated barrier. 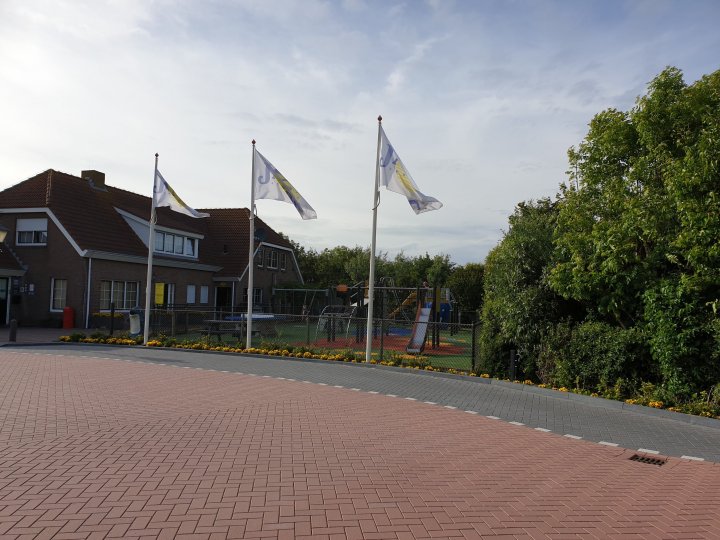 The little mester booked us in, charged us 62.50, but gave us a free Camping Janse shopping bag, and after pointing out on the map how to get to the beach, and the shop next door and where to go, we headed for our pitch.

Nice and flat, sandwiched in between 2 caravans and plenty of space in front. 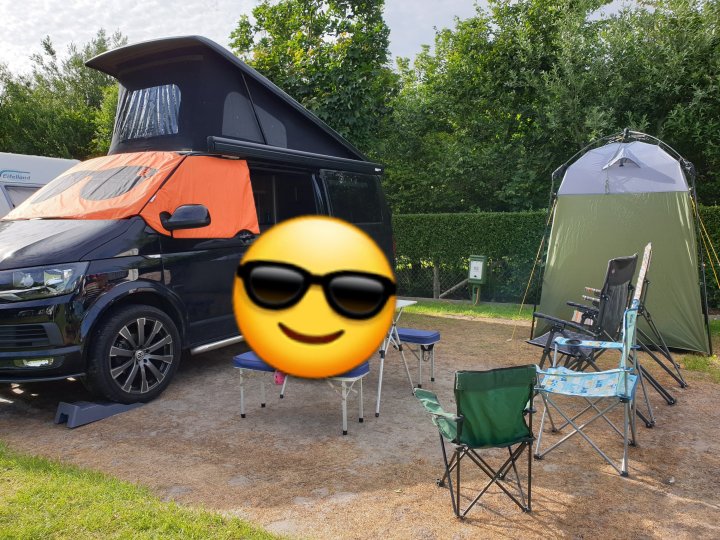 We noticed straight away how well kept the place was, very clean and tidy and nothing out of place.

It was a bit of a walk to the conweniences but they were the kind that mother dreams of – clean, warm, well stocked and plenty of them. The only downside was the additional cost for showers. The mester had forewarned us of the need for 50c coins. One would purchase about 4 or 5 mins of shower time, and the temperature could be regulated, but that didn’t extend the time any.

The wash basins and washing up sinks all had their own cleaning sponge and the hand washing sink had soap and paper towels. There were loads of little washing up stations, so I don’t think it was the water use that they were trying to regulate.

I think me Dad would also approve of the site, as you walked around, every caravan and awning was pitched with military precision – not a sag or a crease in sight.

Another noticeable point was the floral displays

And the ditches and channels of water all over the place, some of which had cheeky wee bridges over. We had to look for trolls. 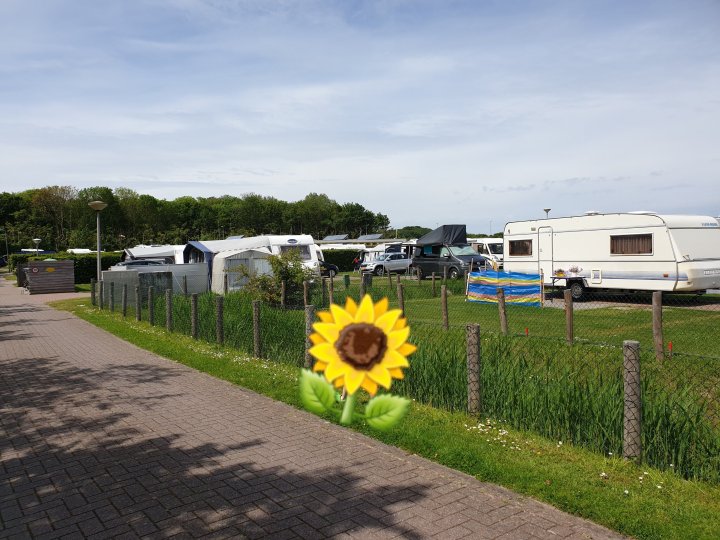 The anklebiterz spotted the play area straight off – it was right by the entrance, but they were also pleased to discover sundry small play areas dotted all around. I think we counted six in total. They were promised a trip, so whilst KB pulled off some culinary wizardry I supervised a jaunt there. We were pleasantly surprised to discover some resident creatures:

Chickens are all very well, but also…

A playground pig was most surprising! And there is always a seagull. 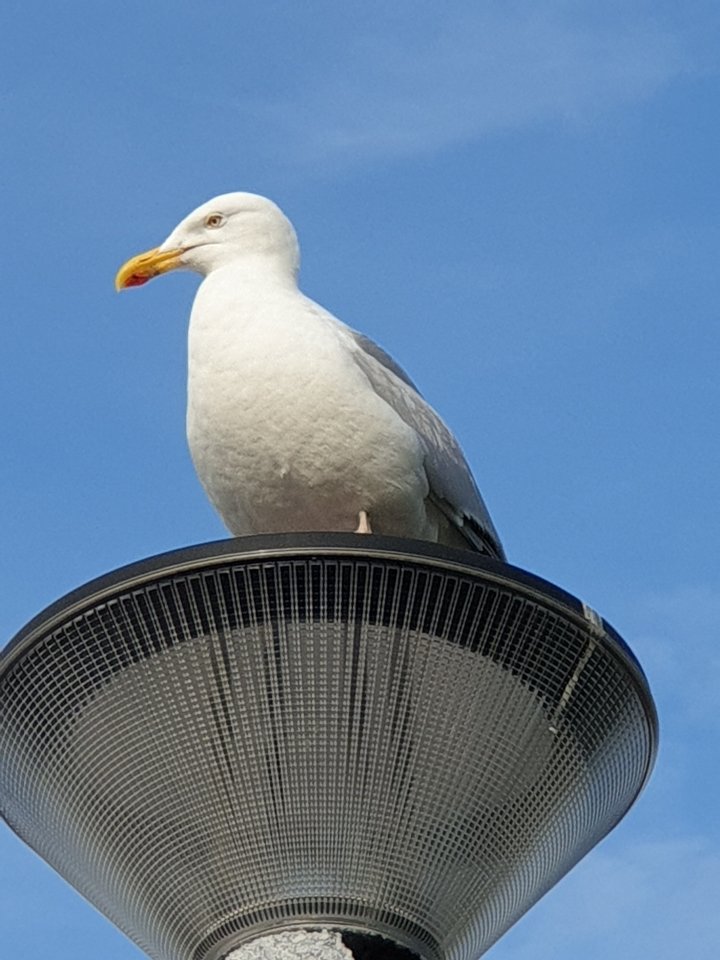 H became most attached to the elephant climbing frame,

Madame enjoyed the climbing wall, but as I was idly waiting for them to get bored (no such luck) I spied a pathway through the trees and decided to inwestigate. It split into two. Curious.

To the right, there was…

A field with 2 huge trampolines! I retraced my steps and took the left hand fork to discover… 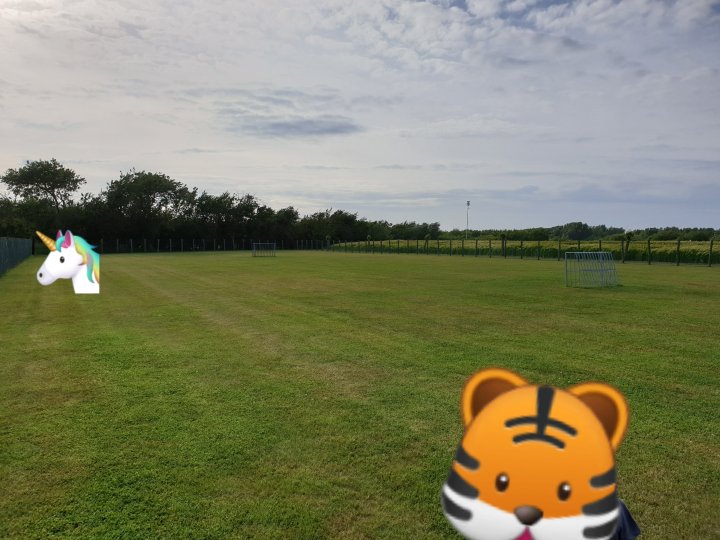 a massive football field across another small bridge. We decided to measure the size of it by sending Madame running around the perimeter and timed the excursion. It took her a minute and 7 seconds – 10 full seconds longer than the entire camping field at Ken Bridge.

However, they both took a shine to the springy camel and dolphin near to our spot, and adopted them, calling them both Colin. Which was nice.

Not that I have a photo to show it, but the site was tucked behind a massive mound of sea defence, with the beach over the other side. It was easily 50 feet up from what you could glimpse through the trees and we decided to check ot out on the second day of our stay, after a trip to the shop on the adjacent campsite to test drive Dutch ice creams. Stroopwaffel sandwich alert!!! 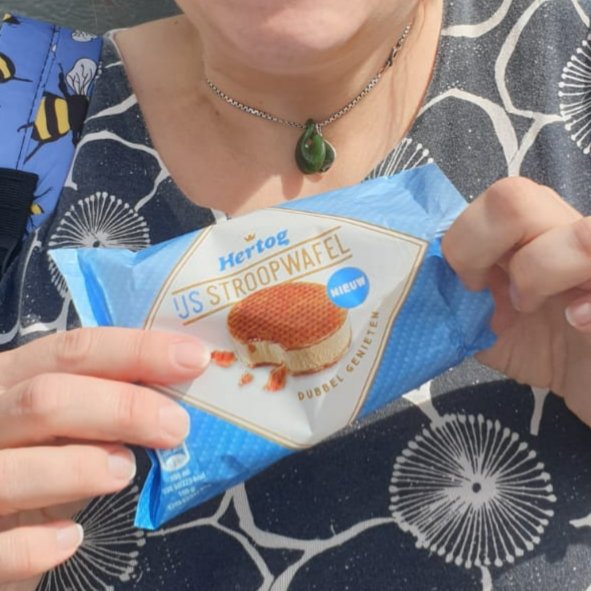 We counted the steps over the top, and it was 115 on the way up, with a path/cycle path on the top and a spectacular view in every direction, and 103 steps down to the sand. 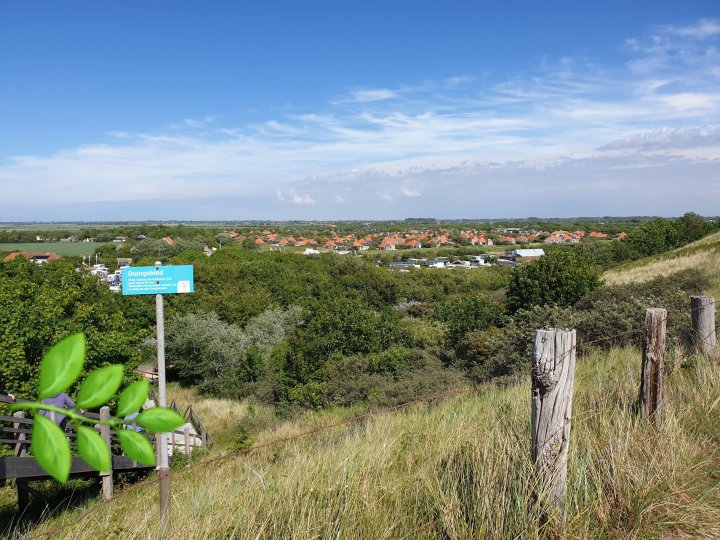 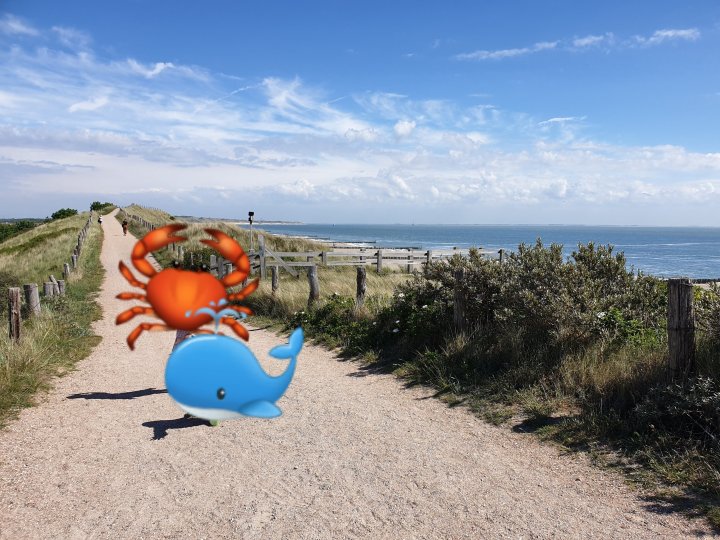 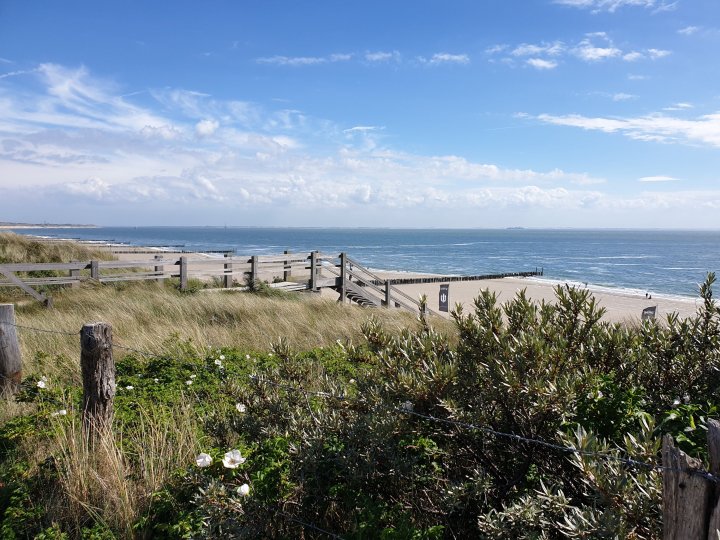 The beach was pleasant enough, but more than a tad breezy, which was becoming a thing. We decided to walk down to the water’s edge, which was frothy, and discovered a collection of small jellyfish dotted around, which kind of put us off paddling, particularly as they weren’t easy to spot until the last second. 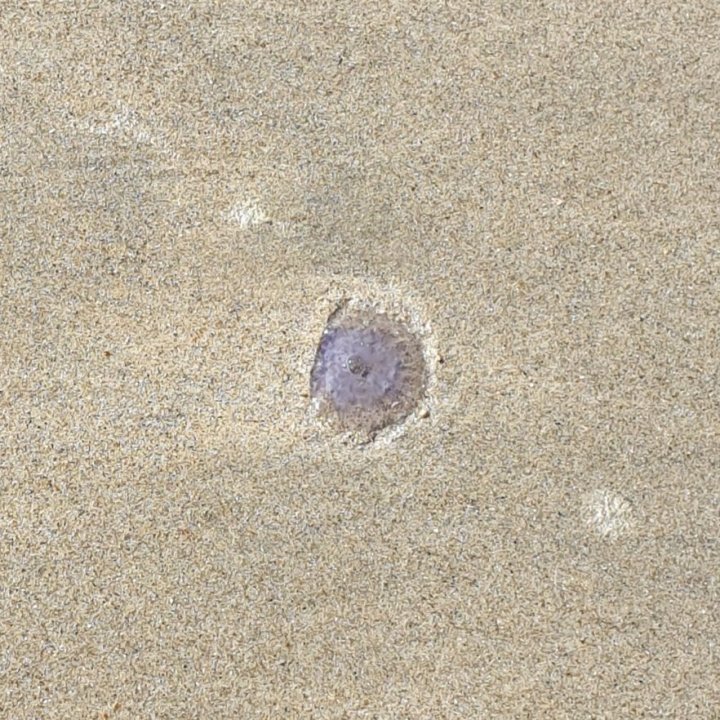 We had a pleasant enough wander and enjoyed the scenery, 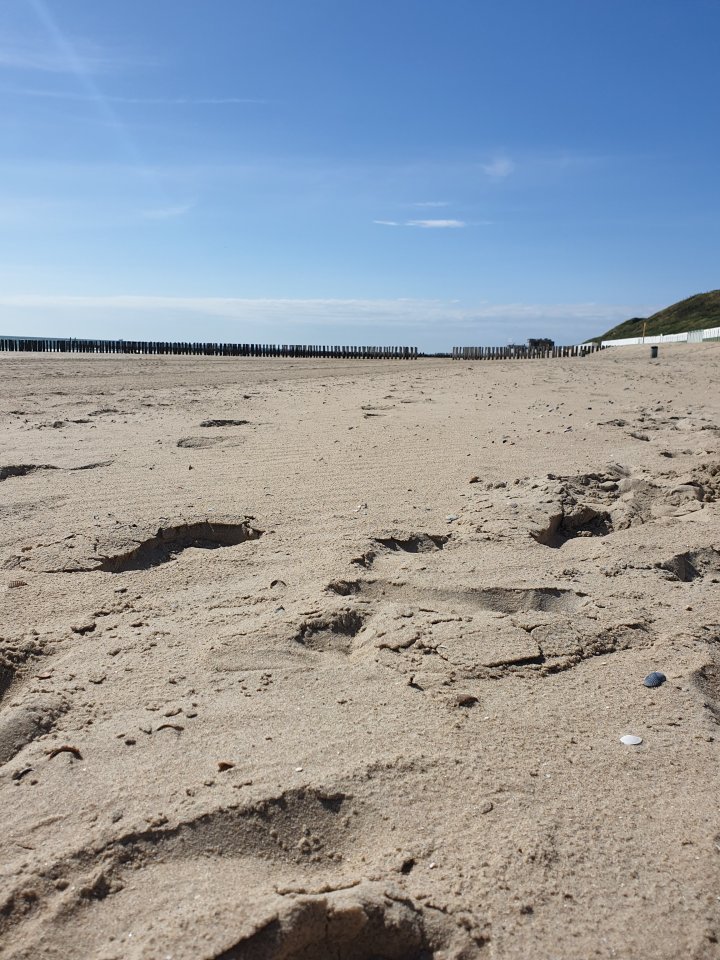 …but soon decided it was time for tea.

Whilst on playground supervision duty I spied the White Ship across the road, and remembered glancing at a brochure in the office, so figured we’d check it out for tea and test our Dutch language skills. 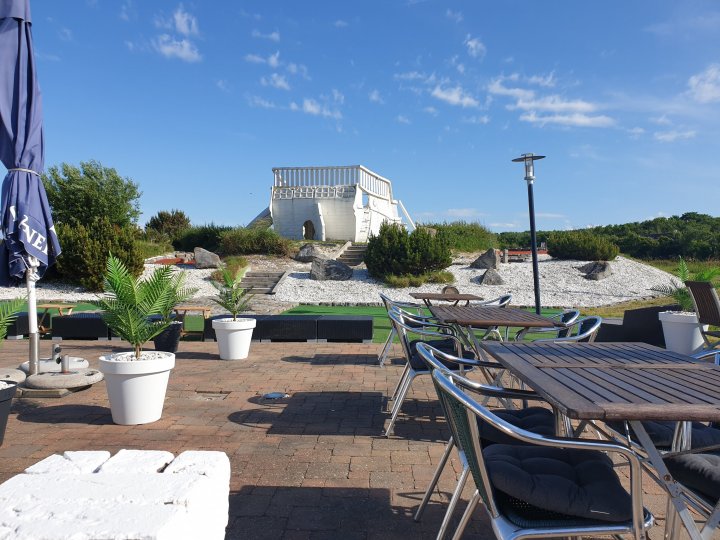 We began on the terrace with a round of drinks, but the late afternoon sun was a bit more full on than we had expected, so retreated inside.

The menu was a challenge:

So I broke my own rule and Google translated some items.

We managed to make our sens understood enough with the toothy little mester and ended up with reasonable tea time, but the fun began when we brought out the pre-meal entertainment for the children. When the little mester saw we had crayons and paper he brought out a pack of glitter and goggle eyes and frozen themed stickers and pictures.

And then after the meal, he brought out this:

Much fun was had, and when they’d had enough we decided to give the mini golf a go. It cost another 19€ but entertained us for another hour or so.

The weather turned cold and the wind got up and we had to abandon the golf before completing the course. H took a very lackadaisical approach to the affair, preferring to forgo the bats and just throw the ball. Madame had a good go and completed most holes in somewhere between 6 and 12 shots. She claims she didn’t cheat. Yeah right. My performance was variable, and KB swore his accuracy was better with one hand. KB had been keeping score diligently, but the final tally was not revealed until the following day, he maintains he won.

Overnight the weather turned and we had heavy rain and thunder. H, unsurprisingly was frightened and both youngsters did not want to remain in the roof. Cue 4 in a bed. No sleep for either of the adults then.

The next morning it was as if the rain had never happened, all the water had drained away, not so much as a blade of grass out of place.

We packed up and headed north again. Liked this one, would definitely come back.