The first draft of Easter plans, involved heading over to Northern Ireland, a spot we haven’t previously been to, but upon inwestigation of maritime transport we realised we’d have a lengthy journey, potentially through South West Scotland, which, similarly remains unknown to us.

Looking into this further, the idea of Dark Skies Forest Parks, and, more specifically CS campsite behind a pub, kind of sold the latter plan. I booked with the Ken Bridge Hotel just outside New Galloway and it cost us a hundy including EHU for 5 nights. 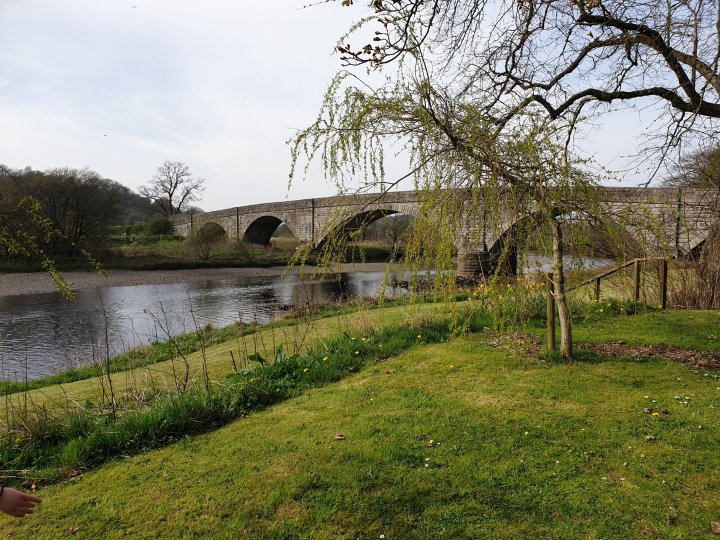 According to the fountain of all knowledge (google) it would take us more than 4 hours to get there, so we packed up the day before and on Good Friday left the People’s Republic of South Yorkshire for all points north in good time, and ably guided by Brian.

All was well until we decided to stop for early lunch at Scotch Corner. Which was a mistake.

After sampling mediocre pasties and potato wedges we found we could not get out of the car park. We hung around a bit, but it didn’t ease off, so we reluctantly joined the queue and at the first opportunity headed in the opposite direction to most of the traffic.

Brian took it in his stride, and introduced us to many a pleasing vista and squiggly carriageway, and other than the boy child desperately needing a pee not 10 minutes after a layby stop, we arrived without incident. 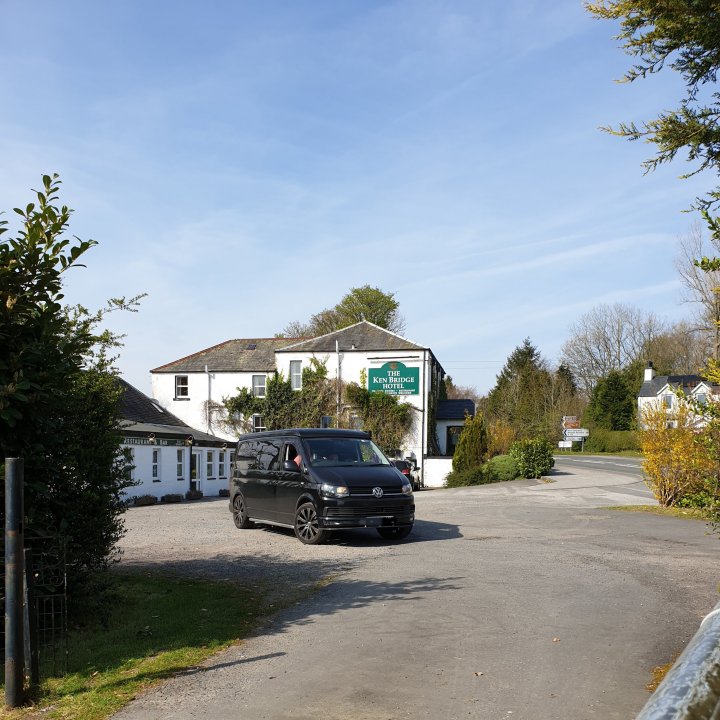 I booked us in with the mester, and decided on the spot that we would sample the hospitality that evening. As the pictures below show, it was a very pleasant spot. 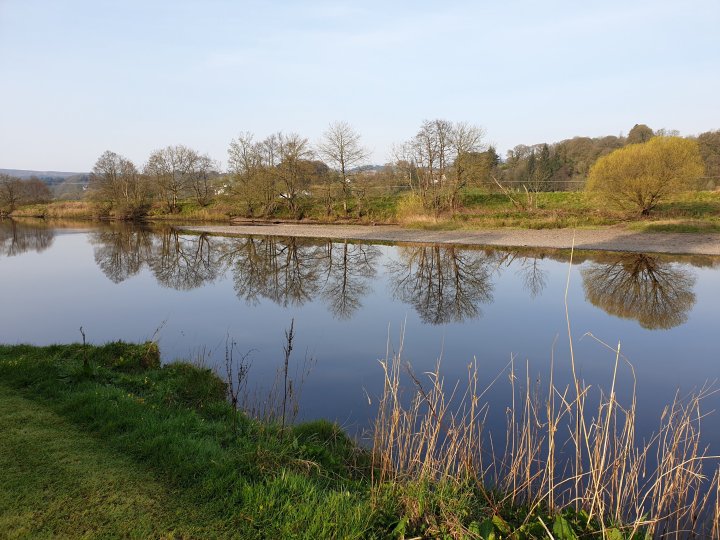 The awning went up without incident and made lots of comfortable space for seating and lounging about. 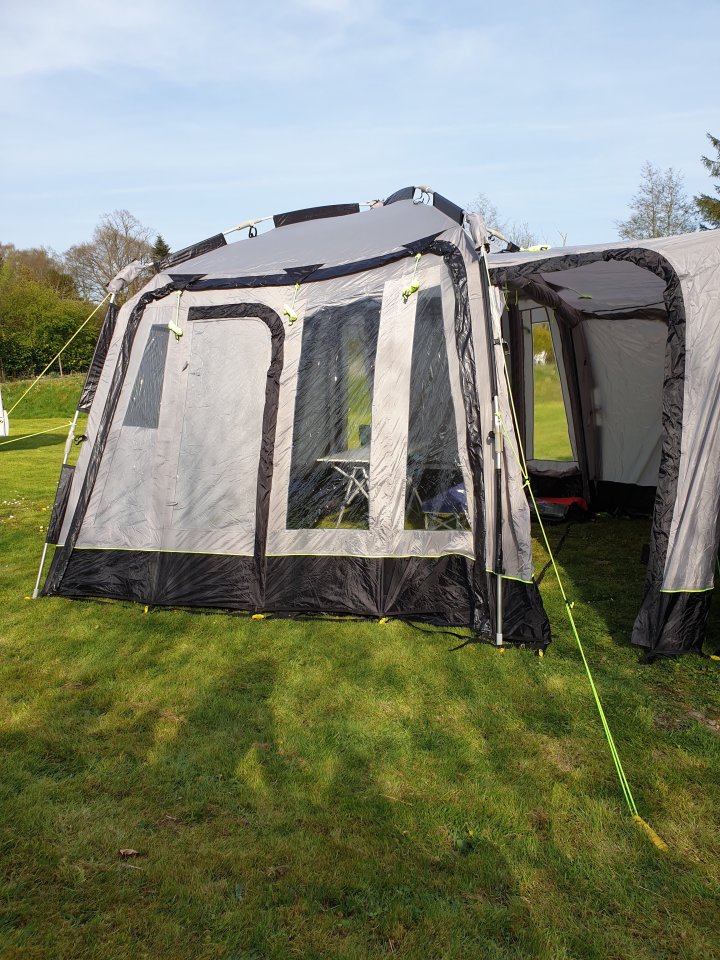 However, it became a magnet for random Scottish flies which got a bit vexatious. 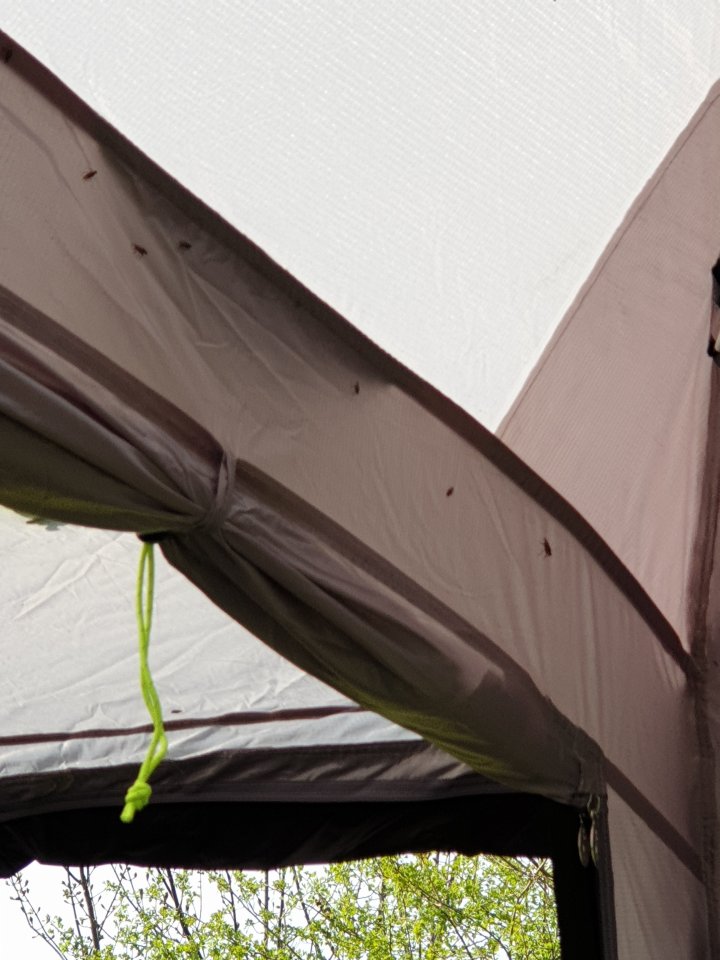 Only on standing back did we realise we’d put the pop top screen on upside down!

Having brought the Popaloo but not the cursed pop up tent, we stationed it in a corner and were thankful of it at times when the smallest was caught short or for nocturnal visits.

Whilst on the subject of facilities, there were 2 toilets and a wet room style shower accessed by a separate door at the back of the pub, open all the time and clean, warm and dry and well supplied, so I’m sure mother would be satisfied. 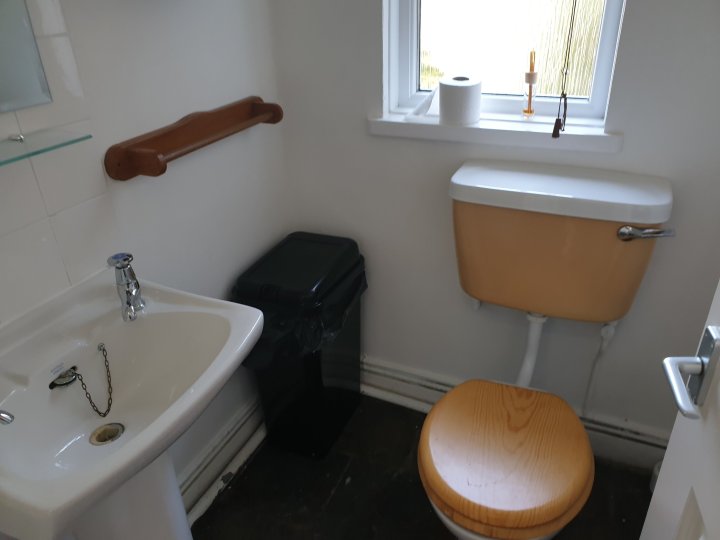 When we arrived, there were a couple of motorhomes and a tent. Over the course of the weekend others came and went and by Monday we had the field to ourselves. 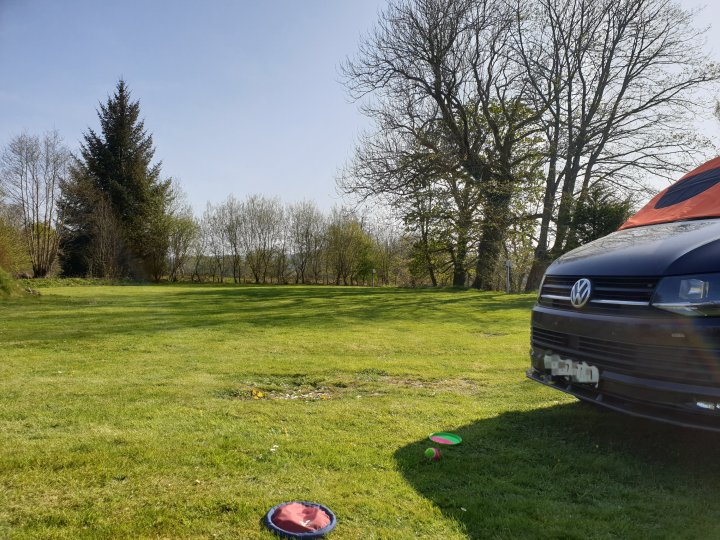 Saturday we hung about in the sunshine playing games

nature spotting and barbecuing a large slab of beef. 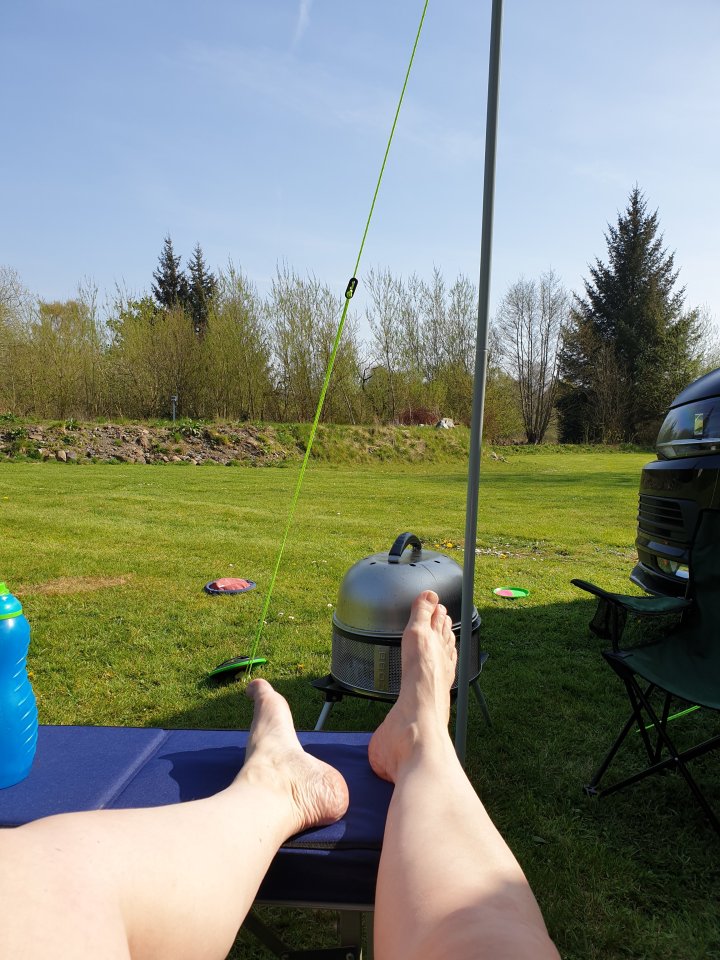 We hung up our campervan fairy lights for the first time, and it was actually Madame who came up with the solution to attaching them to the rings in the ceiling using a J cloth cut into strips – she’s her Nannan’s girl! 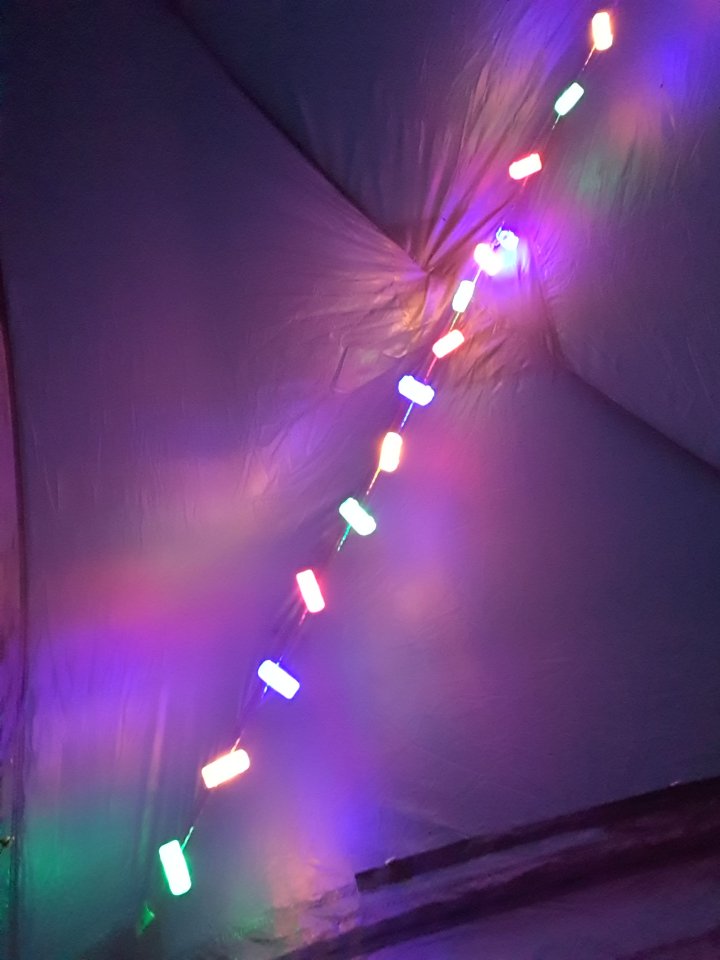 It is to be noted that, contrary to mother’s advice, there was only a single J cloth on board. We cut it in half. In case of emergencies. Still got half left. Unused. 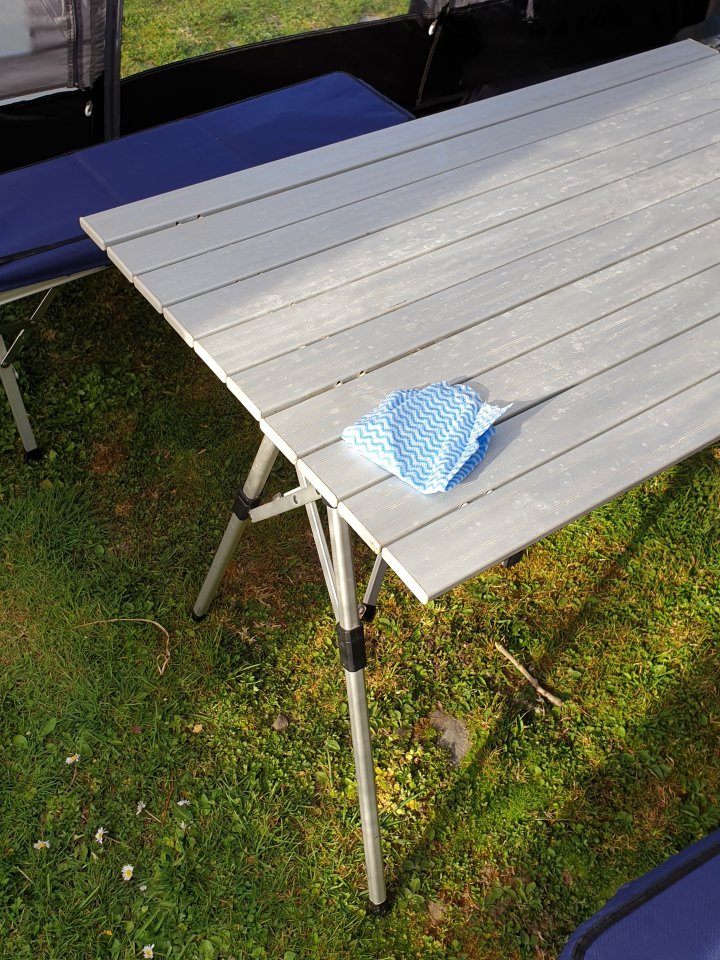 Sunday we ventured to Castle Douglas, had a car park picnic, a most enjoyable ice cream

and a goggle at the assorted tat/knick knacks 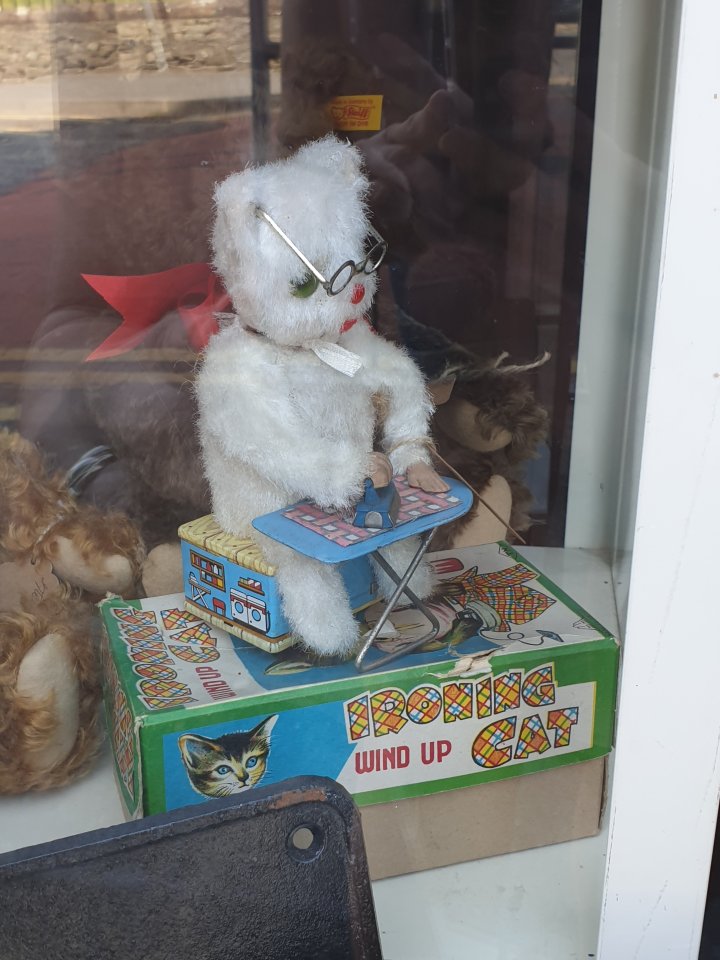 I need a wind up ironing cat.

Obviously mannequins are quite a thing in this part of Scotland. 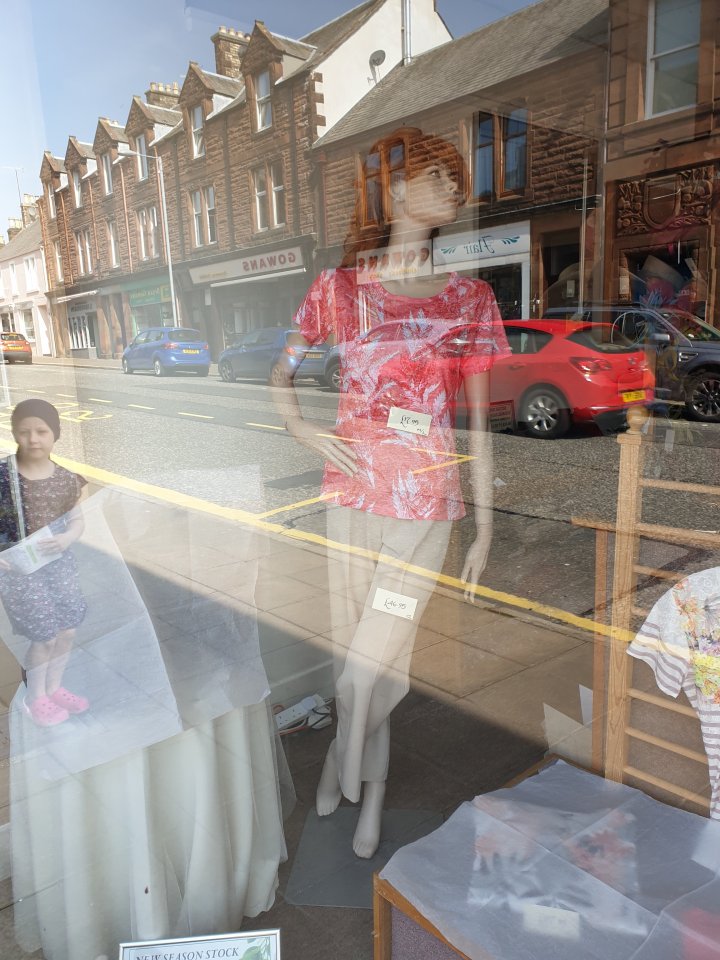 Of course, venturing out once we had erected the awning was fine. Coming back again and repositioning in exactly the right spot was something we approached with care and a small amount of trepidation.

Having read some advice online from your actual Khyam we had laid down a luminous guyline along the length of the van, closest to the awning side to use as a kind of runway to aid repositioning.

KB did a stellar job of manoeuvring into what we thought was the perfect spot. But no. Didn’t quite reach.

We put the guyline back a couple of inches and tried again, this time making note of where the wheels were in relation to the pegs, with more success. There was a little sagging of the connecting tunnel, but it was an acceptable job for the first time, and next time we will get it spot on.

We took a scenic trip along the Queen’s Way through the Dark Skies park,

but the visitor centre was closed, and despite this they still wanted to charge for parking so we ploughed on to Kirroughtree. Glad we did.

Had an excellent walk amongst gorgeous surroundings, chasing a wisp of a butterfly through the forest, had a nice lunch and enjoyed the sunshine. 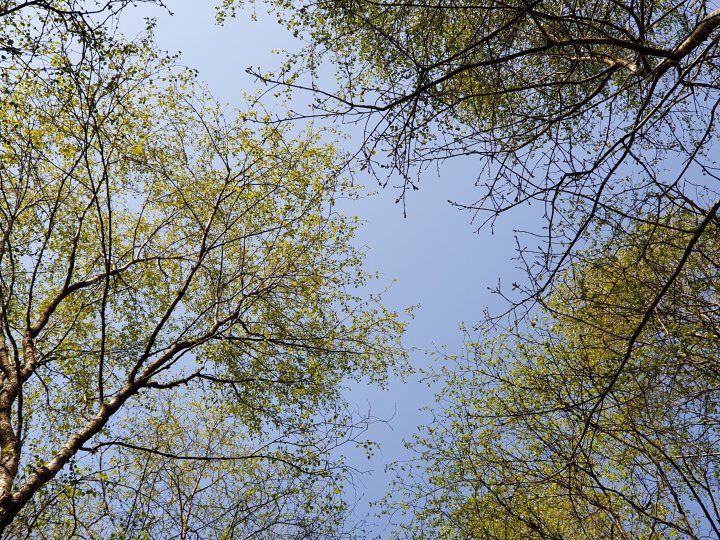 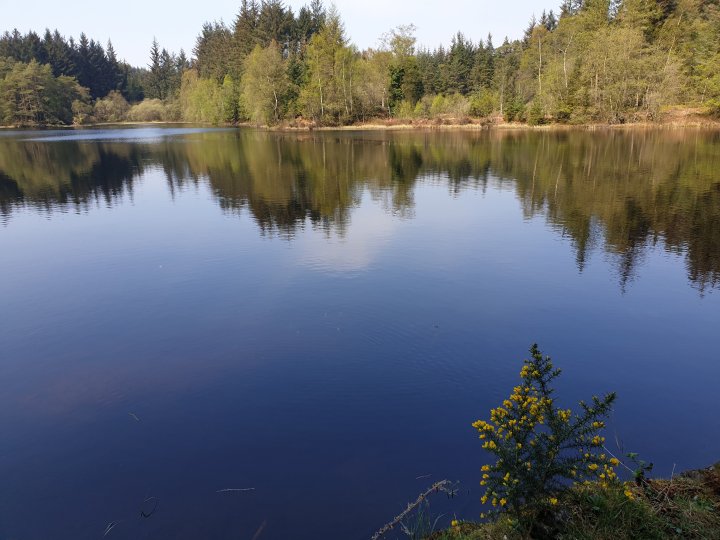 Many sticks were found, including one which needed 2 children to carry it as it was technically a log, and nobody fell down any of the precarious precipices, which was nice.

We took in some of the countryside on a meander back and enjoyed the victuals in the adjoining public house for tea.

Tuesday was the day for getting to grips with the remainder of the new kit. 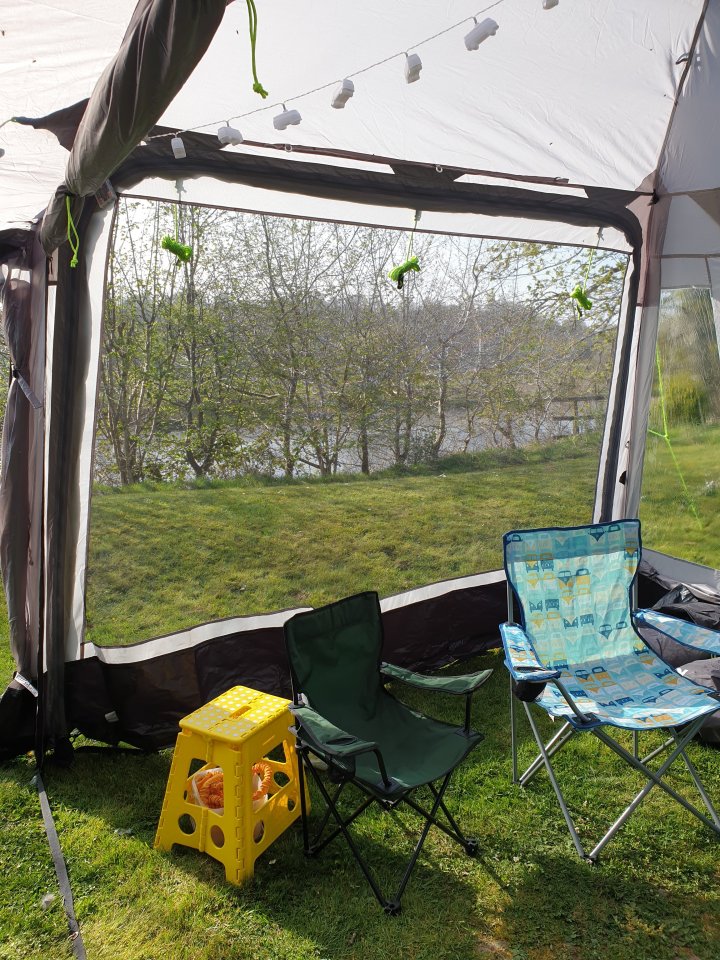 It only zips in one way and will fit on either the front or the back and was a 2 minute job. So, feeling confident we thought we’d tackle the bedroom pod.

So glad we only bought one, we were wondering about getting two. On seeing it up, it makes the awning about as big as the Concord tent. Absolutely enormagantic as Madame says. 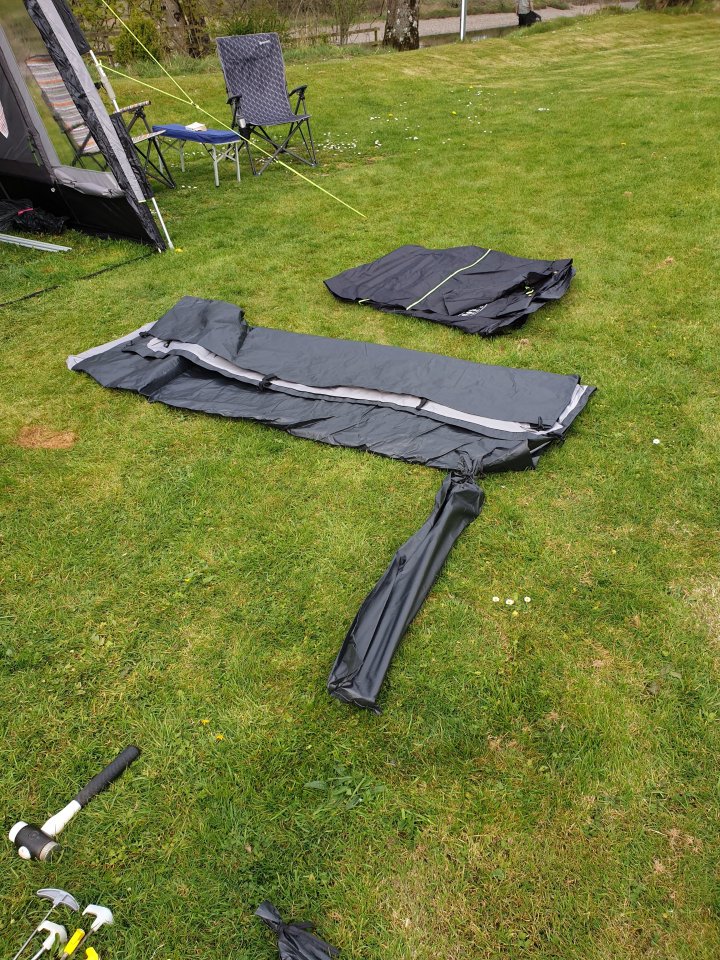 It’s been a while since we put up a Khyam style tent with poles, but the principle was the same as with the big one we used to take to Devon, it’s just been so many years and so many other tents in between it took a bit of head scratching to get it up right.

We’d parked by the banking near the river, so the pod couldn’t go on the back, so we cleared the front. It made a big hole, taking the front off.

When we finally got the poles and guys right to make the pod stand up it was sizeable. Doesn’t really look it from the side view, but

then we inspected the cavernous interior. 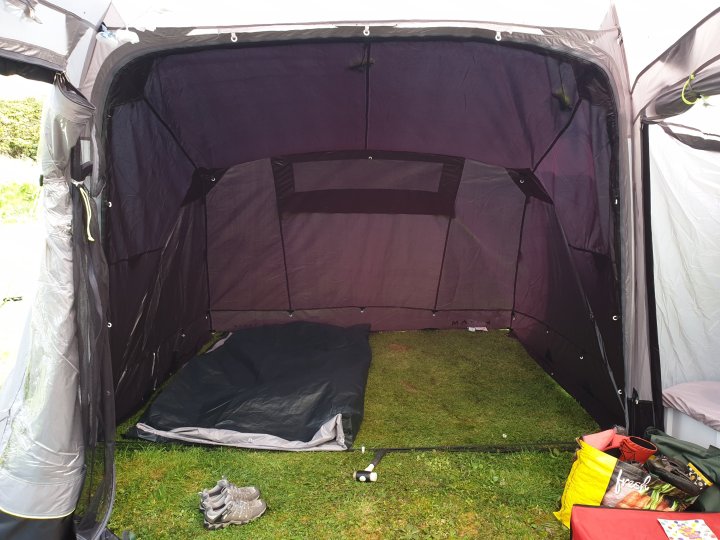 Once the actual inner portion is up, there’s easily room for all 4 of us to sleep in there. We packed the mini thermarests and the foil floor insulation. Both bags more than covered the floor to make it toasty, the kids can have a thermarest each and plenty of space to prevent fisticuffs. 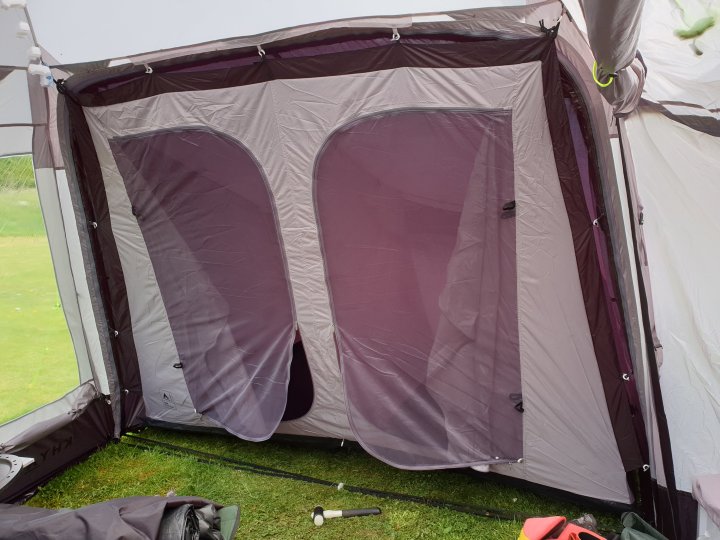 Taking it down was easier than putting it up, but, as is always the way, it’s a snugger fit in the bag once it’s been used.

Despite the totally unexpected but magnificent weather we didn’t get to see many stars. Once the sun started to go down it got cold pretty quick, and the mist and cloud cover came in. I managed one short stint of stargazing and spotted many satellites, the plough and definitely more stars than I would see at home, but any hopes of a Frankton style Milky Way fest were dashed.

So we wended our way home on Wednesday, and on descending southward, said goodbye to the Scottish sunshine and hello to wet, grey, Yorkshire weather.

Not long till the next one.

France, Belgium, Netherlands – end of May.