After a long, noisy and tiring half term week at home with the anklebiterz we snuck away for a pre-camping show stopover in deepest, darkest Derbyshire.

The tickets for the show had been booked for months and knowing that there was likely to be some heavy duty purchasing going on the nipperz were barred from attending this time round and were dispatched to Nannan’s.

We had looked into staying at the show campsite but on further consideration gravel/portakabin johns/evening “entertainment” for over 30 quid didn’t appeal when we could get a calmer, grassier set up for more than a tenner less.

I looked at a place near Tamworth, but all their poggies were fully booked so I called Mrs Woman at Sealwood Cottage near Swadlincote who was v. welcoming and wanted 17 earth pounds for the night including EHU. Job done.

We left mother’s at just gone 5.30 and by the time we arrived at about quarter to seven it was extremely dark. We used the directions on the website in conjunction with Google maps (Brian relegated again) and it was all gravy till we passed through the gate.

There was a sign pointing in to nowhere but blackness for caravans & tents and advice to pass by reception so we proceeded down the driveway to the house… also in total darkness. (Picture taken the following morning, obvs)

We got out, looked around, and could see the little facilities block at the other side of a hedge. But how to get through? We drove on down off the edge of the path (on what turned out to be their lawn) and then realised that wasn’t the right way, so hastily reversed back towards the house again.

At this point KB took off on a recce aided only by the torchbeam from his mobile whilst I consulted the web page for contact details, thankfully there was still 4G! I got Mrs Woman on her mobile and she directed us, past the chickens, across the grass, through the gate and on the right, easy! Well it would be if it wasn’t pitch black, or there was a marked path, or a light, or a sign on that side of the driveway!

Any road we set up with no further drama and checked out the facilities. We had one neighbour who arrived just after us, another campervan that parked practically on the doorstep of the lavs, but other than that there was only wildlife.

The johns would have been most satisfactory to mother with 2 nice cubicles and a shower, and although I didn’t really approve of the towel they were more than adequate. 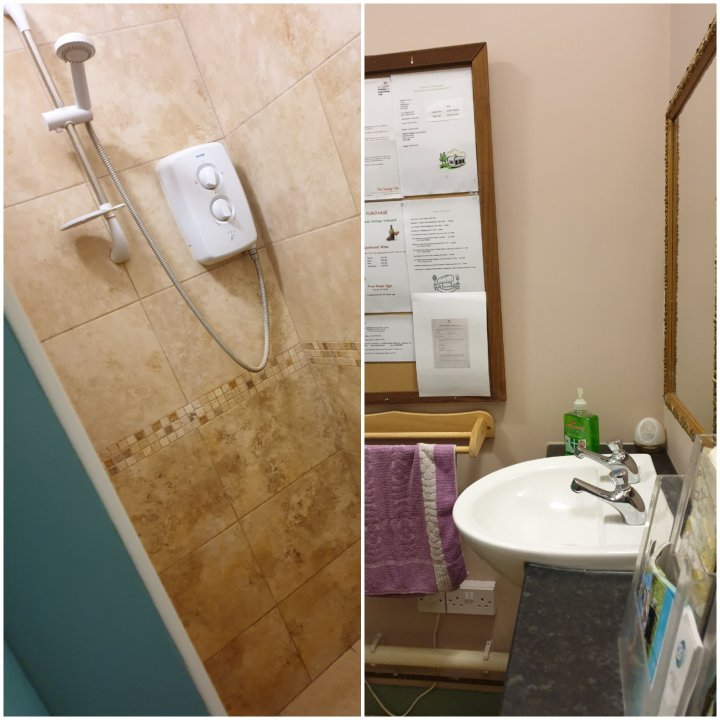 We made curry for tea and enjoyed a beverage and a very quiet and peaceful night.

By 5am I’d clearly had more sleep than I’m generally allowed and feeling rather bunged up so decided to get up. I made it to 6am before the need to put the kettle on got the better of me. It was quite foggy and atmospheric but not cold.

I test drove the new egg cups we had from Aldi last week with brekkie, I think we need to buy bigger eggs! 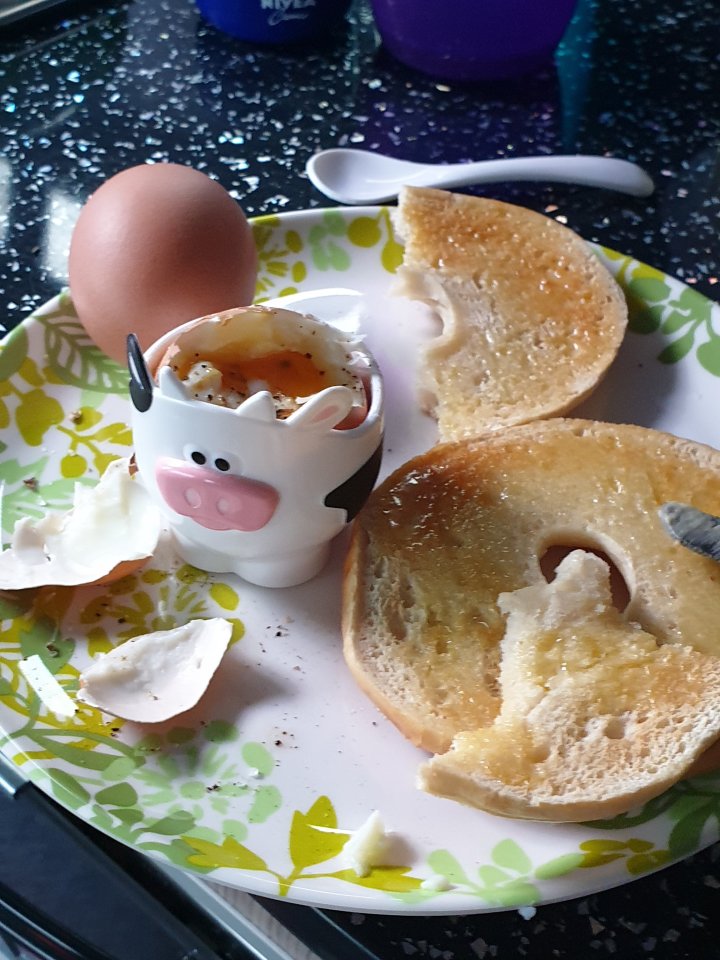 I sneaked a peek at the vineyard at the bottom of the field which looked well established, and worth further investigation, and we were off by 9.15 heading for the N.E.C, where we arrived unusually early.

4. Info on camping in Belgium/Nederlands for Spring Bank

6. A suitable birthday present for someone with a birthday next week (on behalf of others)

8. Visit to the nice people who run the Cobb stand who we chat to every year and lament the lack of accessories for the Supreme model.

All bar two of the objectives were achieved comfortably and there were interesting occurrences aplenty. 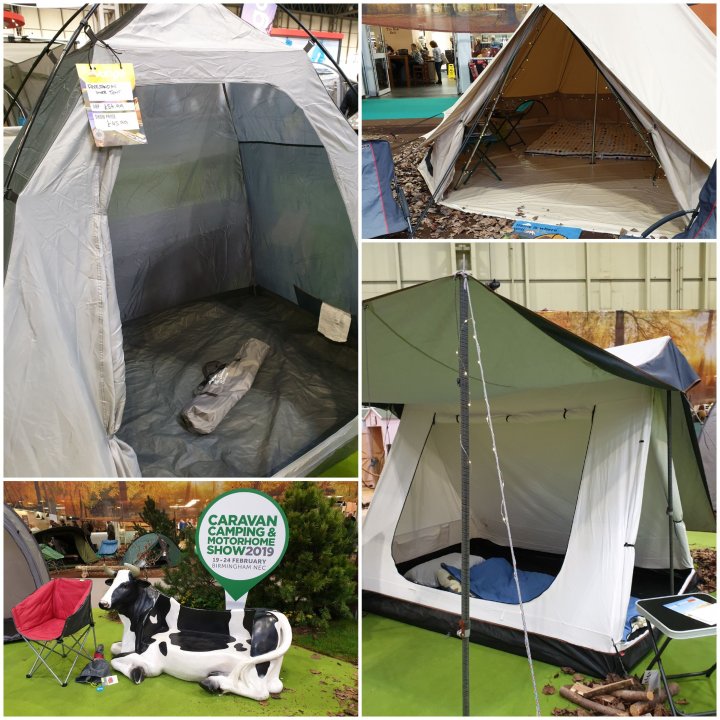 We couldn’t help ourselves from perusing the large tents, and saw some fine examples at Vango, Outwell, Khyam etc. The Vango man did his best sales pitch, and was undeterred when we said we didn’t want one thanks. The novelty item which caught our eye was the free standing inner tent to go with their new hexagon style shelter/awning which would work anywhere and they were selling cheaper than the awning for the Galli III, which we had taken quite a shine to, but ultimately rejected. The favourite tent was, surprisingly the Khyam Airtek 8, with many opening side panels and lots of space. There were a number of cheeky little tents in the woodlandy camping zone, we were intrigued by what looked at first like a classic tent but the whole side lifted up! Also a v.fetching tipi with vis à vis sleeping arrangements and a central living area. But tents were just a sideshow.

We passed by a significantly larger number of campervan vendors than in previous years but had no interest in making comparisons to our own far superior vehicle.

There was the usual selection of campsites, including Madame from Logis de Breuil this year, but sadly no Huttopia and not much on the Belgium/Nederlands front, except for the fella on the Camper Contact stand (lekker).

Awnings were approached with a certain amount of trepidation, we discounted the Vango, shunned the usually favourite offerings from Outwell for being the wrong layout and headed for Khyam, deliberately leaving the frontrunner till last. The new offerings with sewn in ground sheets were nice, but we neither wanted a permanent inner tent, nor the permanent lack of one, so we approached the Dub Hub. We’d more or less decided we were having one before Christmas, on seeing it again I think we were a little bit underwhelmed as it wasn’t as fancy looking as some of the others – particularly having coveted the Airtek mahoosive tent. We spoke to a couple of bods, one who was clearly a schoolboy but definitely knew his stuff, and got them to quote us a price for one with all the accessories. I’d done a bit of (rough) mental arithmetic, so when he came back with a full couple of hundred quid cheaper than the Vango we quickly got over any lingering reluctance. A purchase was made, but only after we’d discussed it further over a (sadly underseasoned) pasty.

We proceeded to Rainbow Screens and put an order in for a pop top screen and windscreen cover in tango orange, with sunglasses print for the windscreen and concluded our other business, by 2pm we were spent and retreated.

Pending a bit more measuring up we should have some nice parcels arriving in the coming weeks, which are going to need road testing – time for another caper!!!