So this weekend we made it 3 consecutive weekend capers after only 3 weeks of having the van. This time we made it 2 nights away, the first being sans enfants, which was superbly quiet, if a little disarming.

I tried the C&CC app again to seek out a nice spot and on the second call we got in at Sandyford Farm, this time a CS, a more modest price bracket and still within acceptable radius for pony clubbing on Sunday am.

Mrs Woman was v friendly and welcoming on the phone, even when I had to call her back to say we wouldn’t be arriving until much later and in person very pleased to see us, along with a brace of vocal Jack Russells.

When we did finally make it, the weather was a little greyer than the wall to wall sunshine we have been getting used to over the past few weeks, but on first sight the place looked just the kind of spot we like.

We chortled at the comedy welcome sign, which brought back memories of that Menorcan summer 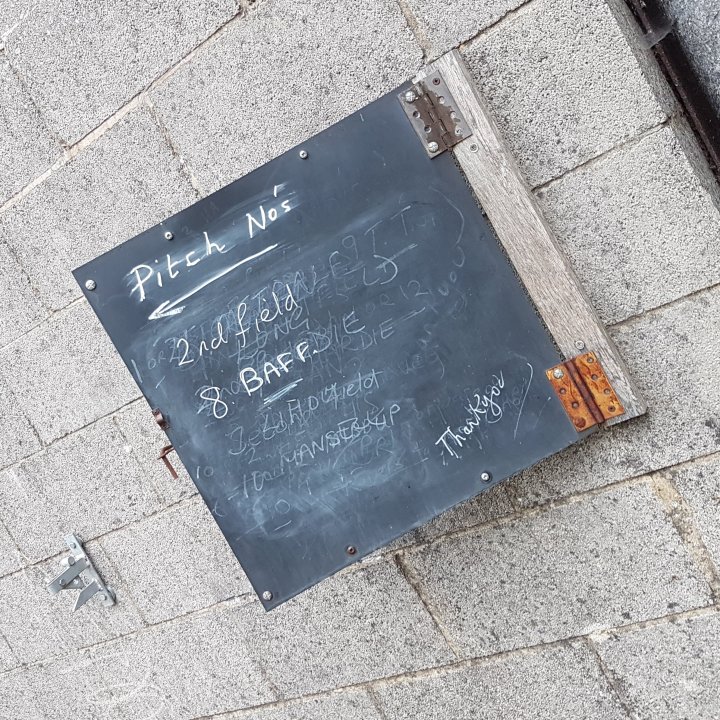 but the place itself was just 2 smallish fields divided by your classic dry stone wall. There were caravans and motorhomes parked along the top hedge, obviously where the power supply was and then just oceans of open grass on a gentle slope. At the bottom was a middle sized pond, which H pointed out on his first meander round, had windmills, a scarecrow, small fishes and insects.

As is the tradition, I inspected the facilities to see if mother would approve. Just on the inside of the first field, as part of the back end of a farm building was the bloc sanitaire and although it was small and simply furnished ( 2 johns, 2 showers, one of which was ensuite) it was clean and pleasant.

Interesting Occurrences from Friday were mainly the absolute peace, broken only by nocturnal motorbike impersonations from Mr Bass, thankfully this weekend I remembered to pack the sleep phones, which muted his utterances somewhat.

A Saturday, in the am, we collected the niños and returned with the intention of test driving the barbecue and reverting to previously excellent yet bulky seating arrangements. We were concerned that our extremely comfortable but large camping chairs were too much of an extravagance in terms of space and weight, but for a weekend, and with boot space if not to spare, then still remaining; we chucked them in, and come beer o’clock the decision was not regretted at all.

My attempts at packing the Cobb were a bit substandard by all accounts. I located and brushed the skeff off the bag, removed the surplus grillage and then went on a mainly fruitless search for cooking bricks. Eventually I found a part bag of eco charcoal which I decanted a portion thereof into an aldi bag and called it a day. I paid no regard to whether there was actually enough fuel to cook a meal for my family, or indeed if said briquettes would fit into the fuel basket, but luckily, the skill of the chef compensated for my haste, but more on that in a minute.

We had looked at the sky and pondered the likelihood of precipitation and concluded that a moist barbecue was a possibility. The thought of packing the mess tent and then having to not only put it up but take it down when on a pony club deadline, and with possible moisture added in to the equation, was not a pleasing prospect, so we reverted to Ray Mears mode and packed the old Decathlon tarp. KB, ably assisted by the peg twins, fashioned a windbreak/shelter/screen scenario to protect the teatime cookery. (Note the aldi bag below.) 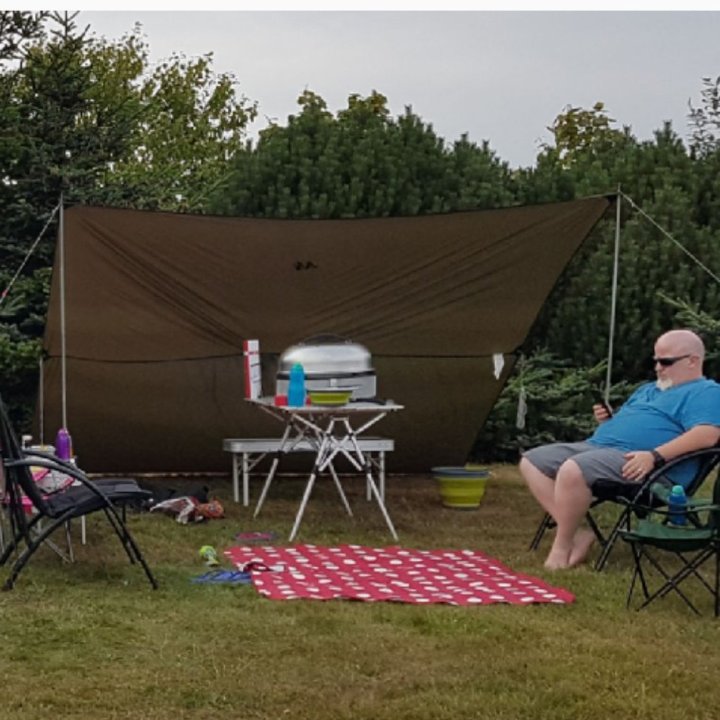 The littlest monkey needed several sharp reminders about not approaching the apparatus, but other than that we enjoyed maple BBQ pork steaks, roasted baby spuds and corns on their cobs accompanied by peas freshly plucked from our own freezer compartment (noice!) 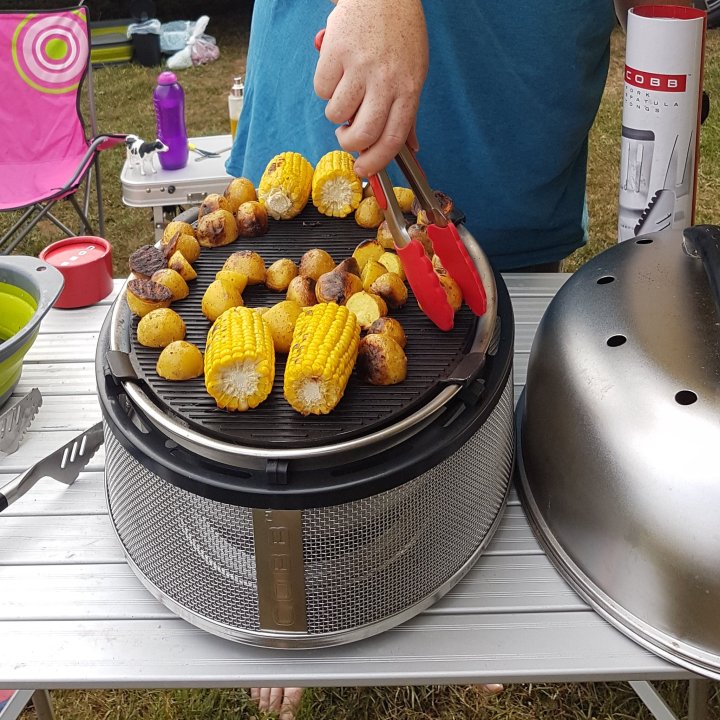 Interesting Occurrences were such that the neighbours over the wall had been guestimating the age of the largest offspring and commenting on her helpfulness at the washing up hour (she was spot on, her husband was out by 3).

Also, it became apparent that the 2 noisy yet harmless chocolate Labradors next door were a useful deterrent for morning noise from the cherubs. H was (in a whispery voice) quiet as a mouse, to make sure he didn’t wake them up and make them bark. Nice one.

1. Cows of many colours were spotted in nearby fields, some of which had horns.

2. Nearby horses were noted and appraised. H claimed one had a bag on its head. (Flies!)

3. Farm shop with adjacent bovine neighbours will merit closer inspection on a return visit, as will the public house in the vicinity.

4. There will be a return visit at some point, as the 2 nights here cost only half a quid more than the one night at Teversal last weekend.

5. As we packed away the tarp, chairs and picnic table before bedtime a Saturday we managed to leave in a timely manner and arrived at pony club without issue.

Although it’s been said before, this weekend will be a quiet one, for organising and tetrising the entirety of our camping possessions in order to further enjoy future capering in style. Now let me consult that app…